Of course I do!

Of course I do!

If you’re not involved professionally in the Jewish world, you might have missed the current tumult over people from different religious backgrounds marrying each other. 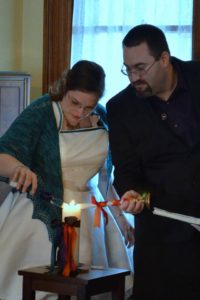 (You’ve probably heard this referred to as “intermarriage” or “mixed marriage.”) The Conservative movement, in particular, has been recently in the (Jewish) news because rabbis are speaking out about defying the ban on performing those marriage ceremonies, even though doing so can result in expulsion from their union, the Rabbinical Assembly. The Reform movement’s rabbinical union, the Central Conference of American Rabbis, discourages its members from officiating at marriages between Jews and others, but each rabbi can decide whether to do so, and what conditions to place upon the couple. The Reconstructionist movement, which performed marriage ceremonies between two people of the same sex from practically the beginning, just started easing up on the prohibition on performing marriages between people of different backgrounds in recent years.

The opposition to officiating comes in two flavors. One is “It’s against Jewish law.” Well, yes. It is sort of against Jewish law (not exactly, but close enough). Note, however, that King Solomon had some 900 wives and concubines (slave wives), of whom approximately 899 were not Jewish.

The other flavor is, “It’s bad for the Jews,” meaning that mixed couples obviously will not raise their children to be Jews and since making sure there are enough Jews in the world is our primary raison d’etre, we won’t do this thing. Of course, just because a rabbi doesn’t perform the ceremony does not mean there will be no marriage. It just means there will be a marriage that starts out with rejection from the Jewish community. That for sure will discourage the couple from raising their kids as Jews. But it’s also wrong in another way – mixed couples raise their kids as Jews more than half as often as both-Jewish couples do. In other words, Jewish members of mixed cultural marriages are replacing themselves more successfully than both-Jewish couples are.

But opposition to neither of these flawed reasons is why the Secular Humanistic Jewish movement’s rabbis and ordained leaders perform marriages between Jews and others. We do it because we believe that two people who love each other and are committed to each other are both lucky and worthy of support. Human beings transcend all sorts of differences – women marry men, country music lovers marry opera singers, Democrats marry Republicans (although I have to admit, I don’t understand this one), and people from Jewish cultural heritages marry people from many other cultural heritages. They are all to be supported and celebrated.